Origin and distribution: The Red Maasai sheep are also called Tanganyika sheep. They are sheep of the semi-arid regions of Kenya and Tanzania. Currently they are mostly found in the semi-arid regions of southern Kenyan and northern Tanzanian rangelands, especially in Kajiado District of Kenya and the neighbouring districts. Before the beginning of the 20th century, their keepers the pastoral Maasai tribesmen used to occupy much wider areas, including the wetter parts of Kenya's high and cool altitude plateaus, the upper eastern escarpments of the Great Rift Valley, such as the Kinangops, the lower slopes of the Aberdares Mountain ranges and the central highland such as, the once swampy areas of where the city of Nairobi is located.

It is most likely that, through periodic alternate exposure to the wetter and drier areas, during the pastoral transhumance movements, these sheep were exposed to the notorious Haemonchus contortus parasite and tolerant and resistant strains of the breed emerged, as it is only the tolerant and/or resistant strains that could survive the alternate natural challenge and exposure to the deadly parasite as the Maasai moved their stock from wet to drier pasture areas and vice versa depending on the season and year. In fact, it is a strain of the so-called East African Fat tailed sheep that are kept by many other tribes in East Africa. If it were confined to the semi arid areas only, then it would have been difficult for it to develop worm resistance to the extent that it does, because it would not have been exposed to as much [CS Okeyo and Baker]. They are predominantly kept by the Maasai pastoralists as well as by the neighbouring tribes.

Physical characteristics: The Red Maasai sheep is identified by its relatively large body size and the population that have been studied most is, the one that was initially selected from Kajiado District in Kenya and breed for coat colour uniformity and improved conformation at the Naivasha-Kenya, under the UNDP-FAO project from the early 1970. This strain is characterized by thick red hair. However, when all of the strains are considered, the sheep are multicoloured, the most preferred colour by the Maasai and therefore the commonest being red, brown and occasionally pied. Average height at withers is 73 (range = 72-75) cm for males and 62 (range = 58-66) cm for females (Kitivo et al. 1974; DAD-IS 2005; DAGRIS 2005). Average heart girth and body length for females are 75.1 cm and 63.3 cm, respectively (DAGRIS 2005). They are short, fat-tailed and slightly fat-rumped. In populations where a fat rump is a predominant feature indicate introgression of either Dorper or Black Head Somali/Persia sheep (See Pictures).

Breed status: Despite its uniqueness in resisting endoparasites, there is no accurate population information among the pastoralists and mixed farmers who keep them. Red Maasai sheep population was estimated in 2002 at 235 400 for Uganda (DAD-IS 2005). No estimates are available for Kenya and Tanzania. The government of Kenya and FAO, and Agricultural Development Corporation (ADC) through the Sheep and Goat development Project, initiated and keep nucleus herds at several stations in Kenya, where some selective breeding has been taking place since the 1969. However, the effectiveness of such programmes has been rather unpredictable due to inconsistent and inadequate funding and expertise.

Utility: The Red Maasai are used for their meat and lard. Their reproductive performance in terms of lambing rate, is reported to be 80-84%, which is comparable to the Dorper sheep breed under medium rainfall zones in Kenya; the lambing interval is about 340 days, which is long as compared to other East African sheep breeds, but can be improved to 246 days when crossed with the Dorper (Kiwuwa 1983); the average litter size is about 1.13-1.21, which is lower than the Dorper and their crosses, greater than the Afar, Riverine Sudan and Black headed Persian breeds and similar to the Baggara of the Sudan. This is comparable only to the Afar sheep of Ethiopia, but lower than the rest of East African breeds (Kiwuwa 1983).

Average birth weight, weaning rates and daily gain of 2.3kg, 97% and 128g, respectively have been recorded in research station herds in Kenya, with mature weights for males and females 45.5 and 35 kg, respectively (Chemitei 1978). Although average birth weight of the Red Maasai is about 2.7 kg with average weaning weight of 15 kg and adult live-weights are 41 and 32 kg for males and females, respectively have also been reported by DAD-IS (2005). Pre-weaning daily weight gain is 105 g for males and 98 g for females (Kiwuwa 1983). The weight of the Red Maasai weaned per kg female bred per year is known to be 561 g, which is still lower as compared to the Dorper, Riverine Sudan and the Black headed Persian sheep. However, it was reported that the mortality rates (28%) of Red Maasai sheep was superior to that of Dorper sheep (66%) under moderate to high nematode (Haemonchus contortus) infections (Baker et al. 1999). crosses between Dorper and Red Maasai performed 828 g (Inyangala et al. 1990; Inyangala et al. 1992; Wanyangu et al. 1993). The scope for control of helminthosis using treatments among the resource poor farmers is limited. That is why the Red Maasai sheep are recommended to pastoralist and smallholder farmers whose flocks experience a problem of severe haemonchosis (Baker et al. 1999). 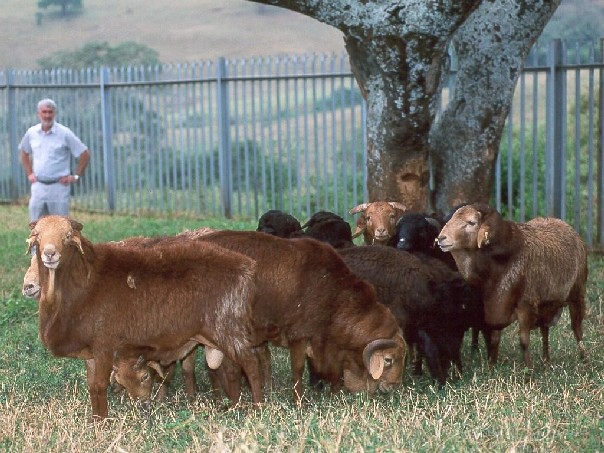