Origin and distribution: `Muturu', meaning humpless, is the Hausa name for the West African Shorthorn in Anglophone West Africa. Since the second half of the first millennium B.C. Muturu cattle were the most widespread breed of Nigeria until the Fulani invasion, which started in 1820 (Felius 1995). The breed is a variety of West African Shorthorn. Generally, two types of Muturu cattle have been identified: a larger Savannah-type and a Dwarf-Forest type, which appears to have evolved through adaptation to the humid forest environment. Most of the Muturu cattle of Nigeria belong to the Savannah type, spread over the Benue plateau, and smaller numbers are found further to the Southwest in Oyo and Kware. This breed is also found in Southeastern coastal area of Ghana. The distinction between the strains of the breed is not yet clear, however, DAGRIS (2005) has classified the Muturu cattle breed into four separate cattle populations, namely Ghana Dwarf Muturu (also called Muturu or Forest Shorthorn), Liberia Dwarf Muturu (also called Liberian Muturu), Nigerian Forest Muturu (also called Kirdi), and Nigerian Savanna Muturu (also termed Muturu). In Ghana, they inhabit the south-eastern coastal area near Ada and Keta Lagoon. In Liberia, they are found in eastern coastal areas of Maryland and Sinoe counties of southeastern Liberia. Nigerian Forest Muturu is found along the coastline of Nigeria, from the border with Benin to the Cameroon border.

Peculiarity: The management level where these cattle are kept is low in spite of which they maintain good body condition by grazing and browsing throughout the year. The breed is also reported to be trypanotolerant (Adeneji 1983). The Muturu have significant cultural values.

Breed status: The number of Muturu cattle in 1990 in Nigeria was between 75 000 to 120 000: 25 000 to 40 000 for the Dwarf or Forest Muturu and 50 000 to 80 000 for the Savannah Muturu (DAD-IS 2005; Rege and Tawah 1999). Despite their abundance they are not considered as safe. The biggest threat seems to be pressure from the numerically superior zebu, especially through crossbreeding, and the increasingly popular N'Dama, through replacement. The Muturu is found in areas heavily infested with tsetse, as a result of which this breed has adapted and naturally selected to be tolerant to trypanosomosis, ticks and tick-borne diseases although it is susceptible to rinderpest.

Utility: They are used for socio-cultural purposes. In Igboland these cattle are traditionally sacred and considered as properties of the local deities or they are dedicated to a shrine. Muturu cows are seldom milked. If milked their yield per year was reported to be 421 kg. The friendly animals are sometimes used for work. As beef cattle they perform well, dressing out at 64%. Some growth characteristics of the Muturu are summarised in Table 1 along with those for the N'Dama breed. Age of first calving of the Muturu is 635 days compared to that of the N'Dama 684 days. Calving interval for N'Dama was 350 compared to 363 days for Muturu (Roberts and Gray 1973). Although the weight of the Muturu is low as compared to many zebu and sanga breeds, their high fertility, tolerance to trypanosomosis, and cultural roles make them an important breed in their traditional breeding areas.

The animals and their hides are used mainly for ritual sacrifices and ceremonies particularly funerals. They are also commonly kept as pets or, frequently, they are used for prestige or dowry purposes.

Table 1. Some growth characteristics (live-weight) of the Muturu and the N'Dama cattle in Nigeria 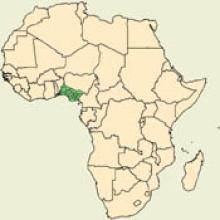 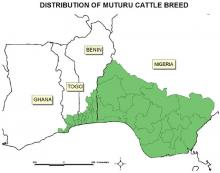