Origin and distribution: Mpwapwa is a composite breed out of local and indo-Pakistani zebu cattle in Tanzania developed since 1940. The breed was developed from the original concept of an Indo-African breed by Dr. H.G. Hutchison who first crossed the local Tanganyika Zebu cows with Red Sindhi and Sahiwal bulls imported from Kenya and called the cross `Indo-African' [CS 1.11 by Gwakisa]. Crossing started in 1940s whereas breeding programme in 1958. Later, some Bos taurus blood (Ayrshire and Jersey) was introduced and later still Boran cattle were incorporated so that by mid-1960s at Mpwapwa Livestock Breeding Station, the breed contained approximately 20% Tanganyika Zebu, 10% Boran, 5% Ankole, 55% Red Sindhi and Sahiwal and 10% Ayrshire (Getz et al. 1986). The breed development continued and in 1971 the breed constituted 32% Red Sindhi, 30% Sahiwal, 19% Tanganyika Zebu, 10% Boran and 9% Ayrshire and Shorthorn. Then the breed was selected towards Sahiwal and by 1988 its share grew to 75% Sahiwal (Katyega 1987). The breed is still being developed at the breeding station (Kasonta and Nitter 1990).

Physical characteristics: The Mpwapwa has the appearance of Sahiwal. They are usually light to dark red, red or red-and-white in colour, but there are some black and black-and-white animals. A hump is normally present and its size larger in males than in females. The development of the dewlap and navel folds or sheath is less than in many other zebu breeds but is certainly more than in European stock. Height at withers is 119 cm in both males and females. Mpwapwa cows have a deep body and wide hips with a well-shaped udder. They are medium sized animals by international standards. Mature males weigh between 450 and 600 kg and females weigh between 350 and 450 kg at maturity. A figure of 275-290 kg is given for the weight of heifers at first calving (Katyega 1987; Msechu et al. 1989; DAD-IS 2005).

Breed status: Recent changes in policy in Tanzania have resulted in some further infusion of European blood into the already developed Mpwapwa cattle. It would appear that the original Mpwapwa would disappear, or remain only as a small group of cows, which in view of its early success and its suitability for Tanzanian conditions seems unfortunate. There is no sustained programme and no on-going multiplication. The breed is at risk and the population size by 1997 was 1000 - 1500. Other than animals on government stations, there are no "purebreds" left on farms (Rege 1999; Rege and Tawah 1999). Das (2004 in DAD-IS, 2005) indicated that the remaining animals are found mainly on research stations and very few are kept by farmers. The animals are at verge of extinction.

* Figures in parenthesis are number of animals 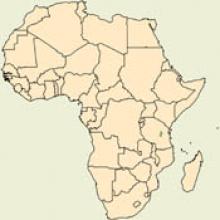 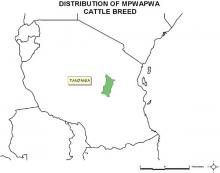