Origin and distribution: Khari (Capra hircus) goats are the principal goat breed of Nepal and are found across the hills and inner valleys in the country. They are quite widespread and can be found in the mid hills and immediate south of high mountains. They represent 56 % of the total goat population. They are prolific and good for meat production. They are hardy and well adapted to local environments, and occur in 6 different colour types namely, Seti (White), Kali (Black), Khairi (Brown), Ghorli (Brown mixed with other colours), Singari (Black with white markings) and Dhobini (White with black markings) (Oli, 1987; Neopane, 1997).

Phenotypic measurements: These goats have a prolificacy of 1.6 kids and a kidding interval of 283 days (Neopane, 2000). They have a relatively small body size that may vary widely in body weight from 20 to 40 kg. The wide variation within Khari goats tends to support the existence of several types. They have been characterized at phenotypic and chromosomal level. Measures of phenotypic characteristics are presented in Table 1.

Kuwar (2000) working with Khari/Hill goats across the hills from east to west of the country reported three distinct types with respect to genetic distance. The goats of the eastern region are smaller in size and the goats from mid western region are bigger in size (Table 2).

Production performances: Khari goats are a promising breed due to their high prolificacy and low kidding interval. A useful measure of reproductive rate is the number of kids born per doe per year. This can be calculated as litter size divided by kidding interval (expressed in years) as per Oli and Gatenby (1990). Taking the means of the values presented in Table 3, the calculated value is 2.1 kids born per doe per year. The figure indicates that the Khari goats have a good reproductive rate. However, the Khari/Hill goats have a low finishing weight. The average live weight at 48 weeks is 12.6 kg. This would produce only 7.8 kg dressed meat (calculated from the basis of 62% dressing percentage as per Aryal and Neopane, 1996). 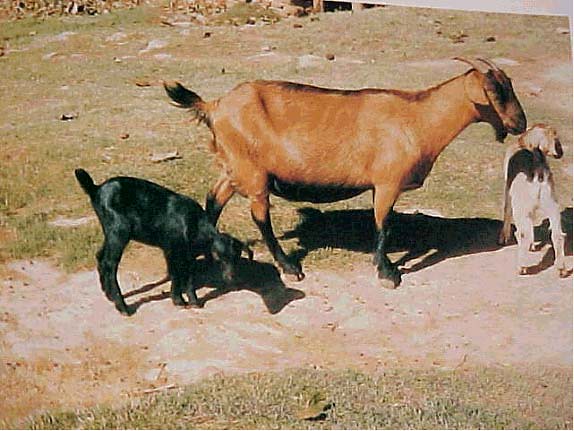