Origin and distribution: The Arado cattle are considered to be intermediate breeds between sanga and zebu groups of cattle [CS 1.10 by Okomo]. This intermediate group has been termed zenga (Rege, 1999). The Arado are found in the highlands of Eritrea and adjacent parts of northern Ethiopia in northern Shire, Adwa and parts of Agame. Of the Assaorta varieties of the Eritrean Arado, the largest ones are found in Hamasen and Libam, the medium size Arado are kept by the Mensa and Waira tribes, and the smallest ones are found in Habab and Akale-Guzai provinces.

Physical characteristics: The colours are mostly red with shades ranging from light to dark. Many animals are red-pied or black-pied and a few of them are black, brown, grey or white. The head is of medium size, with a short and broad face, and a straight profile. The horns vary in size and may be large, crescent-shaped or even absent. Ears are of medium size often partially pendent. The hump is smaller in females, larger in males and the dewlap is relatively large. The back usually slopes to the sacrum. Average height at withers is 111 cm for cows and 122 cm for bulls (Mason and Maule 1990).

Peculiarity:The Arado cattle have thick skins as compared to Barka cattle of Western Eritrea and Northern Ethiopia and this is thought to be useful for protection against cold climate of the high plateau. It has been suggested that the breed is superior in its adaptation to cold and capacity for work to other neighbouring breeds like, the Barka (Begait) and Arab zebus (Mason and Maule 1990; Epstein 1971).

Breed status: Alberro et al. (1982) indicated that out of 1.3 million cattle population of Eritrea, 440 000 were Arado. Rege (1999) indicated that the current population is about 510 000 and that they are not in a state of disappearance. However, there is no appropriate method followed to conserve the breed. Cattle are managed under transhumance such that from the highlands they are taken to the eastern lowlands from November to March and returned to the highlands at the beginning of rainy season in June.

Utility: Arado cattle are much valued for ploughing; they are docile and show great strength and are well adapted to the highlands. Ranges of the live weight of 210-409 and 190-340 kg were indicated for males and females, respectively (Mason and Maule 1960). The Arado cattle can yield up to 4 litres of milk a day, but normally they do not produce much more than a daily average of 1 litre. In spite of this low productivity the cows are normally milked to the detriment of the calves. Their meat is dark and tough and it does not show marbling. 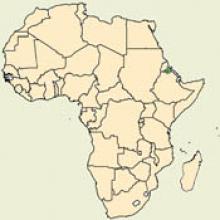 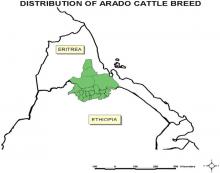