Origin and distribution: The Angoni cattle are found in the Eastern Province of Zambia and adjoining areas of Malawi between the Lungwa River in the west and Lake Malawi in the east spreading southwards reaching northwestern Mozambique. These cattle are today known as Angoni in Zambia, Malawi Zebu in Malawi, and Angone in Mozambique. In Zambia, the Angoni are located between 9º and 14ºS latitude and 30º and 31ºE longitude, and are confined between Mporokoso and Petanke to the west and the borders with Mozambique and Tanzania to the east. In Mozambique they are distributed north of the Zambezi River, in the plateau of Tete in the Tete district, in a small area of Angonia to the extreme northeast on the Malawi border. A strain of Angoni found along the coast between Lake Malawi and the Indian Ocean is referred to as "Bovines of Tete". Genetic analysis has indicated that the frequency of taurine allele is high in Angoni next to Kilimanjaro zebu cattle relative to other breeds (Hanotte et al. 2000).

Physical characteristics: The colour of the Zambian Angoni varies considerably and may be red, brown, black, red or black and white, or brindle. Horns are short and thick and lateral rather than upright (as in the Malawi Zebu); hump and dewlap are well developed. Their size varies from medium to large, with heavy males weighing up to 730 kg. The Mozambique Angoni resembles the Malawi zebu more than the Angoni; it is much smaller than the Zambian Angoni and it is therefore described under Malawi Zebu. The other difference is that the Malawi zebu has a hump, which is forward (i.e. more cervico-thoracic) than would be expected of the typical zebu; this suggests possible interbreeding with sanga, most probably Nguni cattle.

Peculiarity: The Angoni is adapted to a wide range of conditions and responds to improved conditions; in selection on their beef qualities, they have been favourably compared with Boran cattle.

Breed status: The estimated population is 300 000 in Zambia, 796 700 in Malawi and 64 400 in Mozambique. The breed is not at risk. However, interbreeding with the sanga breeds and crossbreeding with exotic breeds may place the breed at risk.

Utility: The Angoni cattle are triple purpose: meat, work and milk. The weight range of male animals is 550-650 kg and that of females is 175-480 kg, with the Zambian Angoni cow being much heavier (300-350kg) (Maule, 1990). Angoni have been described as the best indigenous beef cattle in Zambia and Malawi on account of their high proportion of meat to bone, high dressing percentage (54 percent and above) and their well-fleshed carcass. Angoni cattle compare favourably with Barotse, Mashona, Afrikaner and Boran cattle in calving and weaning rates (Maule 1990). In weight of weaned calf per 100kg cow metabolic weight per year, Mozambiqan Angoni recorded 143 kg (Tomo et al. 2000a,b), which is better than those reported for Zambian Angoni (Hetzel 1988), Afrikaner in South Africa (Schoeman 1989), but was slightly less than the larger breeds (Barotse, 121 kg and Boran, 119 kg) (Thorpe et al. 1980).

Hetzel D.J.S. 1988. Comparative productivity of the Brahman and some indigenous Sanga and Bos indicus breeds of East and southern Africa. Animal Breeding Abstract. 56(4):243-255.

Schoeman, S.J., 1989. Recent research into the production potential of indigenous cattle with special reference to the Sanga. South African Journal of Animal Science. 19(2):55-61. 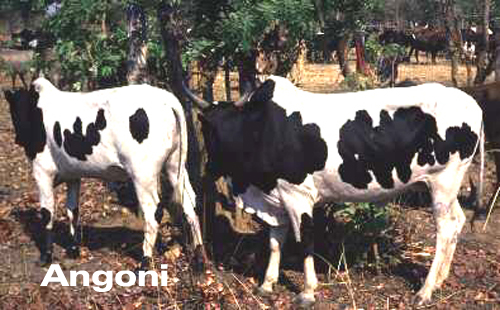 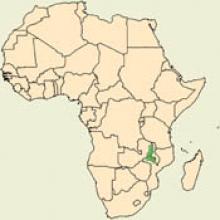 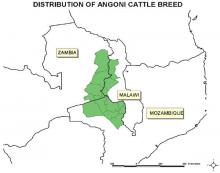